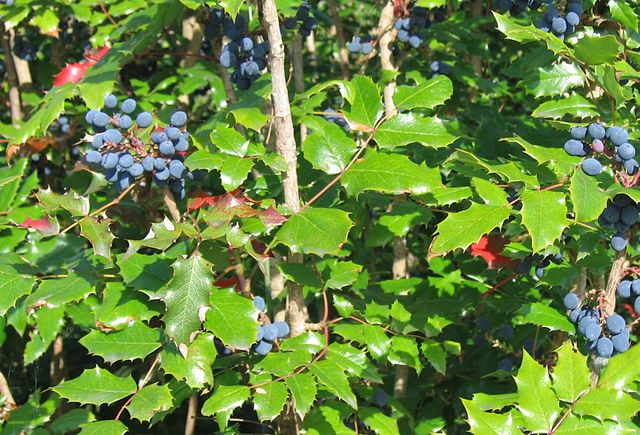 Oregon grape has a place in every herbalist’s apothecary. It possesses unique antimicrobial activity and will be increasingly important in our post-antibiotic world. It also offers liver support, cardiovascular support, and blood glucose regulation. Read on for more information on this treasure of a plant.

Oregon grape refers to several closely-related members to the Berberis genus (B. nervosa, B. aquifolium, B. repens), each with slightly varying appearances. It is an evergreen shrub that stands between 2 and 6 feet tall. The leaves are green, oblong, and shiny with a leathery texture. The root is 1-4cm in diameter, covered by a thin outer bark that conceals a bright yellow inner bark. The root is odorless but bitter. Flowers grow in bright yellow clusters in the spring, and typically mature into ‘grapes’ in summer (Moore 2003). In the fall, the leaves turn orange and eventually vibrant red in color. Berberis species are well represented in Northern temperate ecosystems, and each species occupies its own unique niche. For example, B. nervosa can be found in low elevation forest understories as well as higher second-growth forests, while B. aquifolium prefers sunny locations. They are also favored by florists (stands have suffered over harvesting) and can be found as ornamental plants in city gardens and neighborhoods (Moore 2003).

Oregon grape is a common name that refers to one or more medicinal members of the Berberis genus, which is contained in the Berberidaceae (barberry) family. This family is comprised of evergreen dicot (seed has two embryonic leaves) plants with bright yellow inner bark and 3 bracts on the back of the flower. The barberry family contains about 650 species, and most of them are Berberis (approximately 500 species) (Elpel 2006, Whittemore 2017).

Many Oregon grape root species were initially classified under the Mahonia genus. Mahonia and Berberis genera were separated based on leaf morphology. Some botanists observed that members of the Berberis genus had single leaves, and Mahonia species had compound leaves. Thus they were separated. Botanists now argue that Mahonia genus members should in fact be incorporated into the Berberis genus. This is because members of Mahonia and Berberis readily hybridize with one another.

These taxonomic reconsiderations are becoming more common. Species were initially classified using morphology, as the botanists of earlier times had only appearance to use, not genetic analysis. As we understand more about genetics and reproductive behavior, it calls these separations into questions, and debates ensue.

So Mahonia is officially considered to be a ‘probable synonym’ for Berberis (NPGS 2014).

Even though its common name is Oregon grape root, the inner stem bark is preferred in herbal practice (see Collection below). Some herbalists have experimented with leaves as a mild astringent. The berries are very tart and therefore considered to be rich in Vitamin C. They are used in some food preparations like jams and jellies, albeit with a good amount of sweetener. Oregon grape root and stem bark is harvested in the Spring or Fall. The inner stem bark is prized among herbalists and medicine makers. The stems are cut with a hand pruner and the outer bark peeled (I scrape it with the sharp end of a butter knife), exposing the yellow inner bark. This is then carefully peeled with a smaller game knife, avoiding the white inner root. It can be dried in paper bags or on flat baskets or screens. (I dry it on flat baskets with a fan for air circulation.)

It was formerly believed that the stem was inferior to the root as it contained less of the medicinal alkaloids. Herbalist Elise Krohn put this to the test and performed TLC on a root and stem sample for comparison. She found that the stems actually contained more berberine than the bark! I have not observed a difference in extract strength between roots and the inner stem bark. I now use the stems now in order to reduce the impact of harvesting on the plant.

As of this writing, Oregon grape root is on the United Plant Saver’s ‘To Watch’ list. Please use care.

Update: Many herbalists maintain that the root inner bark contains more alkaloids than the stem bark. We will not know for sure until we have definitive data. The experiment described above was only one investigation, and hopefully there are more to come. Additionally, herbalist Howie Brounstein has successfully re-rooted B. nervosa after harvesting the distal roots, and believe that this is a more sustainable way of harvesting Oregon grape than removing the aerial parts (which dry the soil and negatively impacts the plant).

So our understanding of Oregon grape chemistry and ecology is still evolving. Let’s keep the discussion going.

Berberine is very well studied in the medical literature, and is responsible for the yellow color of the root. There are many other alkaloids in Oregon grape, including berbamine, canadine, columbamine, corydine, and more (Moore 2003). Berberine derivatives take many forms: berberine sulfate, berberine HCl, and berberine chloride. Much of the research cited for Oregon grape is based in berberine research.

It might be tempting to attribute the bioactivity of Oregon grape solely to berberine. But let us not fall into the trap of reductionism. Oregon grape also contains tannins, resins, polysaccharides, and a weak acid known as 5′-methoxyhydnocarpin (5′-MHC). There is evidence of phytochemical synergy between and berberine and 5’-MHC and MDR-dependent efflux (a pump similar to our own P-glycoprotein pump that bacteria use to expel toxins, and one of the ways that they acquire antibiotic resistance) (Stermitz et al. 2000). Synergistic antibacterial activity against S. aureus was observed with goldenseal tincture and berberine as well (Ettefagh et al. 2011). We return to lessons of phytochemical synergy and wholism: the whole is indeed greater than the sum of its parts.

Berberine-containing herbs have a long history of use in Ayurvedic and Traditional Chinese medicine. In Ayurveda, herbs like Tree Turmeric (Berberis aristata) were used to reduce excess pitta and kapha. TCM use of herbs like goldthread (C. chinensis) and Phellodendron amurense centered on the clearance of damp heat. These applications foreshadow contemporary use. Herbs that clear damp heat are often antimicrobial, anti-inflammatory, and alterative.

Oregon grape root was also once known as “Indian barberry” as it was widely used in North American tribal lineages as a gastrointestinal aid, kidney support, and general tonic for health. Many tribal communities also used it for intermittent fevers accompanied by diarrhea. It was used by the Apache community as a gum remedy. It was also administered for tuberculosis infections by the Nitinaht, Sanspoil, and Miwok people. The Blackfoot community used it as a blood medicine (alterative), infant remedy (specific use unknown), and for rheumatism (Moerman 1998). The fruit was often used as a food (fresh or dry). The bark, stem, and even leaves were crafted into dyes for many types of fabrics.

Due to its isoquinoline alkaloids like berberine, Oregon Grape has demonstrated antimicrobial activity against numerous bacteria, such as E. coli and MRSA. It also possesses antimycotic activity against pathogenic fungal species like Candida and Aspergillus (Mills and Bone 2013).

Plants that contain berberine may participate in beneficial herb-drug interactions with antibiotics by engaging in efflux pump inhibition. Bacteria use efflux pumps to rid their internal environment of noxious chemicals. (This is one mechanism of antibiotic resistance.) Berberine inhibits this pump, enabling antibiotics to do their job more effectively (Stermitz et al. 2001).

For topical use, I prefer tinctures or decoctions of the inner stem bark, applied to the skin with compresses or as a wash. Infused oils of Oregon grape can be made, but I find this to be cumbersome as its antimicrobial alkaloids are water soluble. It can also be ingested for GI tract infections like Giardia.

Berberine is not a systemic antimicrobial; its effect is local.

Oregon grape can be used topically for staph infections and MRSA (particularly in conjunction with antibiotics, and please be working with a healthcare provider on this).

As a bitter herb, Oregon grape can also serve as a hepatic or liver supportive herb. Several studies support its use in regulating bile acid metabolism (Guo et al. 2016; Sun et al. 2017). See All the Things that Livers Do for a review of liver function and hepatic herbs.

Oregon grape root plays a complex role in the GI tract. Not only does it possess antimicrobial qualities, it also contributes to epithelial regeneration by increasing secretions from the intestinal wall itself (Yu et al. 2016). This strengthens the mucosal layer, which is critical for proper GI microflora, nutrient absorption, and intestinal motility.

Some of this research may be extrapolated to Oregon grape. (Recall that Berberine-containing herbs have a range of only 2.5-13% total alkaloid content.) Given its effects on digestion and liver function, I consider this to be a choice herb for stagnant digestion coupled with metabolic imbalances.

As a bitter, Oregon grape root and bark is cooling and drying. It is used to dispel hot, damp conditions. It is also associated with liver and gallbladder meridians.

Oregon grape bark and root are moderate to high-dose substances. Doses range from 0.5mL-5ml TID (3x/day) daily depending on the clinical presentation and therapeutic target. For GI tract infections, higher doses are needed. For

Due to its berberine content, Oregon grape root is not for use in pregnancy or breastfeeding. In animal studies, berberine has demonstrated uterine stimulating effects. Berberine has been found in human breast milk after ingestion (Chan 1993).

There is some in vitro data to suggest potential pharmacokinetic interactions. One study found an increase in serum levels of cyclosporine A (Qui et al. 2009), citing inhibition of intestinal P-glycoprotein. However, no other studies or clinical anecdotes regarding interactions could be found, and the risk of interaction is considered to be low.

Herbalists use caution in cases of acute liver disease or where the liver is inflamed or “hot”. This is typically observed as a pointed, red tongue, accompanied by excess salivation and frequent loose stools.