The Nobel Committee of Medicine and Physiology announced Youyou Tu as the Nobel Prize winner for her work in the development of artemisinin to treat malaria. Artemisinin is derived from the Chinese herb qinghao, also known as Sweet wormwood or Artemesia annua. The story of artemisinin’s discovery and development is a compelling one, revealing the political and cultural forces that shape bioprospecting and pharmacognosy. It’s also the story of the transformation of medicinal plants and compounds as they travel through diverse medical systems.

It all started in the Vietnam war. The Northern Vietnamese military were experiencing higher death rates from malaria in the jungles than combat, and pleaded with Chairman Mao Zedong for assistance. (The United States military reported that 1% of combat troops were succumbing to malaria each day.) Mao initiated Project 523–named as such because it began on May 23 1967– and enlisted around 500 scientists to develop a new malaria drug. The drugs available for malaria treatment were chloroquine and quinine. While initially effective, resistant malarial strains quickly surfaced. In the context of the Vietnam war, even a slightly more efficacious treatment was a significant military advantage. Tu was a researcher at the Chinese Academy of Traditional Chinese Medicine. Eventually, she would receive a Lasker award in 2011 and become the first Chinese scientist to receive a Nobel prize this year.

The scientists split into 2 groups and each took contrasting approaches. The first group cast a wide net: they screened 40,000 compounds for antimalarial activity. The second group, of which Tu was a member, guided their search by historical and traditional Chinese medical knowledge. They scoured ancient texts and visited with rural village herbal healers to accumulate a list of Chinese herbs with potential antimalarial activity. After their initial scan, they identified 2000 herbs. After further screenings, the list whittled down to 380 extracts from 200 herbs, which were then tested on mice. After a series of biactivity-guided fractionations, they found a way to extract artemisinin from A. annua. This was in 1972, 5 years into the effort. Though the compound had been identified, there was no venue for clinical trials in communist China, which was in the throes of its cultural revolution. (The research and academic capacity of China was suffocated due to the extreme political persecution of its scientists.) This project was rare in that it was allowed to exist, solely due to its military implications.

The United States had a parallel malarial drug development effort at Walter Reed Army Institute of Research (WRAIR), resulting in the development of mefloquine. However, WRAIR began its initial screen in 1963 from 250,000 of potential antimalarial compounds–considerably more than their Chinese counterparts. This wide screening strategy sharply contrasted the Chinese approach of using traditional and historical data as clues for drug discovery. And it shows: trials of mefloquine did not begin until 1975, 12 years into the project. (Now, mefloquine is rarely used due to its severe psychiatric side effects.)

By the early 1970’s, artemisinin development was well underway. The compound was identified in 1972 and the chemical structure elucidated in 1975. The findings were first published in 1977, and released internationally in 1979. It was truly a medical breakthrough. However, it was not recognized or endorsed by the WHO for nearly 3 decades.

There were a few obstacles to overcome before artemisinin could be widely available. Firstly, the Vietnam War ended in 1975 and Mao Zedong died in 1976, unleashing political chaos in China. Project 523 was subsequently disbanded in 1981, stunting the growth of its champion compound. Though the findings were published, they were not actionable for drug development. Patent laws disintegrated in communist China, and its members did not use Western ones. Hence there was little commercial motivation to finalize the drug. To compound the matter, malarial typically strikes impoverished populations. The effort remained in purgatory until a Swiss company Novartis broke through the concrete by patenting an artemisinin derivative. The WHO then endorsed artemisinin in 2000, and it became widely available in 2006. The WHO approval of artemisinin was critical, as medical NGOs cannot use aid dollars otherwise.

There are many laudable aspects of this discovery, certainly deserving of a Nobel prize. Some claim that this is evidence that the Nobel committee recognizes the merits of herbal medicine. But the truth is more complex than that. (Or perhaps it isn’t- recent evidence suggest that the whole A. annua plant reverses artemisinin-resistant malaria.)

Artemisinin is the tale of two medical systems: Traditional Chinese Medicine and biomedicine. The antifebrile effects of qinghao were known 1700 years ago. But it wasn’t known as an antimalarial herb. That concept was not even present at that time (but concept of ‘wind’ and ‘heat’ were). In this case, a researcher used her knowledge and clues of TCM and applied it to another system. We wouldn’t have artemesinin without medical chemistry. But we probably wouldn’t have it without TCM either. Tu took an old herb, A. annua, and transformed it both materially and conceptually. In this example, TCM was a substrate for medical innovation. It seems that the paradox of tradition as innovation may have some merit. Tu was, as Marta Hanson says, ‘medically bilingual’. She had the ability to read and understand 2 different medical languages and understand their conceptual differences.

The story of artemisinin asks the question: what discoveries would be possible if more people were medically bilingual?

In my view, the moral is this: When we open our minds and learn a new language, we not only build bridges between knowledge bases. We’re able to transform and create in ways we never thought possible. Tu took an unconventional path in medical research by probing her society’s traditional medical knowledge. Other researchers are looking to texts like Bald’s Leechbook for MRSA treatments. 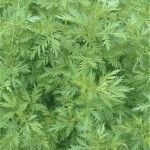 Whole Artemisia plant overcomes Artemisin-resistant malaria in mice: the whole is greater than the sum of its parts