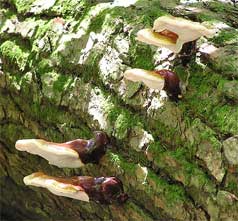 As plants die back and the rains return in Autumn, fungi take the stage. The return of the Autumn rains awaken the slumbering mycelium, who stretch their hyphal networks through their respective substrates. In eager anticipation of the wild delicacies (and especially the mycorrhizal species like chantrelles, porcini, matsutakes, and Candy caps, which resist human cultivation as they grow only in association with certain tree roots), mycophiles and foragers hit the forests…raincoats, wool hats, cute little baskets and all.

Mushrooms have mystique. They are their own universe. Being a plant person, I was intimidated when I began learning about mushrooms. Structurally, they can resemble plants. But metabolically, they are more like animals—oxygen breathing, external-stomach-having, animalistic occupants of their own dikariotic kingdom. And throughout the centuries, certain cultures have been more mycophillic and mycophobic than others. Western Europe, for the most part, eschewed our fungal friends, whereas Asian societies embraced them for food and medicine for over 2 millenia (some sources say 4 or even 7 millenia). In the Western world, we’re beginning to befriend our fungal allies and, in the process, opening previously sealed doors of perception.

Learning about and understanding other life often feels like solving a riddle. And Reishi is one of the Emperors of Mystery—a grand riddle to solve, a mystery to decode. What makes this enigmatic mushroom perplexing is its wide reach and numerous points of contact with the human animal. Its range is extensive. It can be found wild in North and South America, Asia, and Europe. Most of its traditional use is concerned with spiritual potency and longevity. Some of the names bestowed upon it include 10,000 Year Mushroom, Mushroom of Immortality, Herb of Spiritual Potency. Reishi translate into English as “Spirit/divine mushroom”. Its Chinese name Ling Zhi roughly translates to “Spirit plant”. Written in Chinese, the 3 characters mean “shaman” “praying for” and “rain”. The latin name Ganoderma lucidum is significantly more profane—Gan=“shiny”, derm=“skin”, lucidum=“shiny”.

Its historic associations with longevity, spiritual potency & vigor are evident in cultural artifacts of Ancient Chinese and Japanes culures. In Japan, emperor’s staffs donned a carving of the the sacred mushroom. It was depicted in temples, tapestries, and other works of art of the era. Kuan Yin, goddess of compassion, is often depicted holding it. In some settings, Reishi was regarded as a panacea. Looking at the scope of traditional use, 4 themes can seen: treatment for an assortment of liver ailments, lung conditions (asthma, bronchitis, etc.), hypertension, and nervous conditions (insomnia, nerve pain, nervous tension). In TCM, it’s regarded to be warming, nourishing, detoxifying, astringent, and dispersive of stuck energy. It was used to nourish the Heart official, which stores shen or Spirit. It was used for those with deficient qi and blood, which underlies a host of pathologies. It also held a place in folk magic. Hung above the door, it repelled evil spirits. Women also gifted men the antler forms of Reishi to express sexual interest.

(A note on taxonomy: for the purposes of this post, unless designated otherwise, Reishi means Ganoderma lucidum. For the foragers, G. lucidum is found on hardwoods. If you see a similar polypore on a conifer, chances are good that it’s G. tsugae or G. applanatum, which are now thought to be the same species. While these other species haven’t been studied as extensively, the overlap in terms of energetics, constituents, and therapeutics is growing.)

Clinical studies on Reishi are extensive. It’s the most well-studied medicinal mushroom in Western medicine. PubMed results for Ganoderma: 1080. For the sake on comparison, Trametes versicolor (Turkey Tail) comes in at 511 results, Grifola frondosa (Maitake): 217. Research supports Reishi in improving host immune response, inhibiting the histamine response, supporting cardiovascular health, lung/respiratory support (especially when combined with Cordyceps sinensis), hepatoprotection, chemoprevention, as an adjunct to chemotherapy and radiotherapy, antiviral, and as an antiinflammatory.

A lot of the current excitement around medicinal mushrooms is due to the research developments and popularization of β-glucans. Beta glucans refer to a class of molecules (which include β 1,3 glucan, β 1,6 glucan, D-fraction, etc.) that are high molecular weight/large branched chains of polysaccharides that originate in the chitin that comprises the fungal cell walls. These polysaccharides are connected by beta linkages, meaning that they resist denaturing by the enzymes present in our digestive systems. (Compare this to starches, which are bonded by alpha linkages.) As a result, they pass through our digestive processes intact. Depending on the molecule, they then bind to one or several receptors on innate immune cells (TLR, Dectin-1, or CR3) where they mimic an antigen, triggering an immune response. Reishi fruitbodies contain around a 41% beta glucan content (according to Paul Stamets), which increase macrophage activity, TNF-α, NK cells, IL-1, IL-2 and T cells. It can contain over 100 different immune supporting polysaccharides, including beta glucans, proteoglycans (protein-bound polysaccharides), ganna-D mannans, heteropolysaccharides, and others.

Some researchers and clinicians hold this immune stimulation to be responsible for the chemopreventive qualities of Reishi. The Ngeihm hypothesis, for example, holds that this mechanism makes immune-evading cancer cells visible to macrophages and neutrophils, preventing tumor development. (Numerous other mechanisms are proposed, including modulating of the p53 checkpoint. See resources below.) Reishi has also been studied to be a safe and effective adjunct to chemotherapy and radiotherapy, due to its ability to ameliorate toxic side effects, supporting immunity, alleviating oxidative stress, and sensitizing drug-resistant tumor cells to chemotherapy drugs. In fact, it’s officially sanctioned for this use in Japan.

Furthermore, as a result of its ability to stimulate a Th1 immune response, it’s helpful in balancing Th1/Th2 perturbations, which can cause and exacerbate immune disorders.

But that’s not to say that β-glucans are the star of the show. Other compounds in its fruitbodies (specifically, Ling Zhi 8, ergosterols, ganoderic and lucidenic acids) are biologically active. And there can be over 200 of them. Its triterpenes (ganoderic & lucidenic acids) is responsible for its adaptogenic/antihypertensive qualities. These are the compounds that can modulate the allergic response, as they stabilize IgE, IgM, IgA, IgG antibodies. (I’ve found this particuarly helpful for food allergies. A blend of 5 Ganoderma species have saved my behind a couple times post-gluten ingestion…) Reishi contains sterols in the fruitbodies as well (such as Ganoderans A & B), which acts as hormone precursors. These can help lower plasma blood sugar levels.

Reishi is a favorite for inflammation—including neuroinflammation, which is particularly tricky to treat. People have had positive experienes with arthritic pain as well. And on the neuro note, it protects the brain from beta amyloid damage. It also acts as a mild CNS relaxant, helpful in insomnia, anxiety, and muscle tension.

One of its key uses in contemporary culture is in lung & respiratory support. Mice studies have demonstrated expectorant and antitussive qualities. I don’t use it for this purpose, but I do notice that it has a particular affinity for the heart/upper chest area. Again–back to Heart nourishment.

But one can easily see the subtleties and complexities of this being. Now that it’s more easily cultivated,  it’s relatively common and available at herb shops and online. A shopper might be overwhelmed by what’s on the market, but I’ll break it down:

(I increasingly see more and more novel preparations of Reishi—like cracked spore supplements, spore oil, etc. There’s little to support its use. Reishi spores began being analyzed only in 2009. But it’s something to watch. Reishi disperses a huge amount of spores. So no doubt someone’s trying to find a use for them.)

And you can easily grow your own Reishi indoors, or on logs. It’ll do well on oak, plum, maple, or birch. In the wild, it’s found on hardwoods. And it’s known as a ‘butt-rot’ fungus (yep), meaning that it grows throughout the roots and lower part of the trunk. It’s a primary saphrophyte (meaning it grows on fresh organic material, like wood) and a very weak parasite. Once a tree dies, 2-3 years afterwards is when you can expect to see Reishi growing on it. (This hasn’t stopped some paranoid foresters and landscapers from regarding it as an aggressive, parasitic invader. Correct these folks when you can. Ganoderma is not parasitic. It’s a saprophyte.) If you see it growing on conifers (mostly hemlock, seldomly a spruce), it’s Hemlock Reishi or Ganoderma tsugae or applanatum). It’s a bit more bitter, but its uses in supporting health are thought to be very similar. Like most mushrooms, Reishi grow out from mycelium, to spawn, to end fruiting substrate occurs in 7-day increments—following a lunar cycle, as Stamets pointed out to me a couple of weeks ago. In Western esoteric traditions, the Moon is thought to rule our fungal friends.

In terms of making medicine, you’ve got some options with Reishi. Hot water extraction (decoction) is traditional. You can add aromatic chai spices to a brew, such as star anise, allspice, cinnamon, nutmeg. Other immune-supporting herbs like astragalus, or adaptogenic herbs like ashwaganda and Devil’s club can be included. Work with your local plants and be wild with this! Get creative and let me know what you come up with! Here’s one of my favorite brews for a happy, full, powerful Heart:

One of favorite ways to use Reishi is in soup stocks. I love to put the following in a crockpot or large pot:

Turn on the heat and simmer overnight. Strain and use in a soup, or freeze it in mason jars (leave room for it to expand!) to use later.  Other than stocks, they’re too chitinous and tough to be used in other culinary applications. (I’ve heard of foragers enjoying the sauteed young & tender Reishi fruits, but I wouldn’t want to harvest a premature Reishi.)

When harvesting, you want to find relatively mature Reishi fruitbodies. If they still have a band of white around the edge, it’s still growing. Once you harvested them, slice them up quickly and then stick them in a freezer for 24 hours in a plastic bag. Reishi species often contain Horned beetle eggs. If slices are left to dry, they’ll hatch in the Spring and consume your supply.

Tincturing mushrooms are a bit different than tincturing plants. You essentially want to do a double extraction—one step with alcohol, one with hot water, then combine. Broken down, here are the steps:

The same method would apply to shiitake, turkey tail, and any other mushrooms.

Reishi is a dynamic, life-giving universe unto itself. Its ability to nourish at the deepest level of Heart and Spirit shows itself in its historic and traditional use, the myriad clinical studies concerning it today, and its spiritual significance. I encourage you to learning more about this benevolent mushroom. The following books are excellent and highly recommended.

Elsewhere on the web: 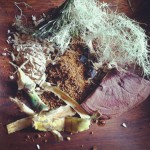